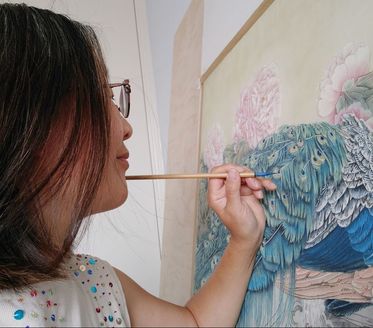 Jane Li is an award winning international artist currently based in Perth, Western Australia, where she is a member of the Western Australia Watercolour Society. She studied fine art in China and Australia, and is best known for her detailed botanical art and traditional Chinese paintings.

She draws inspiration from her surroundings, especially Kings Park Botanic Gardens in Perth, where Jane also volunteers as a guide. Jane’s botanical sketches are used by some of the guides at the Park when they give their tours. She is a member of the City of Kiwnana Multicultural Advisory Group, volunteers with many community groups, and has held art workshops for organizations including Heritage Perth.

Jane was born in Hebei, China, and studied art and Chinese Calligraphy in Beijing. She is a Tai Chi Master and participated in a competition in 2013 where she was ranked 6th highest in China in the forty-two Yang style. She is a skilled interpreter and has translated a book which was subsequently published.

Please visit the events page for details of upcoming exhibitions.